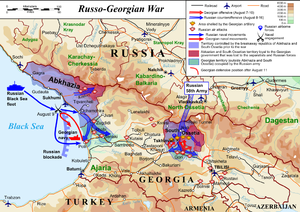 Russian invasion into Georgia (Российское вторжение в Грузию) refers to the events of 2008.08.08; the Russian troops invaded the territory of Georgia and occupied two Georgian regions, Abkhazia and South Ossetia.

The Russian side suffered huge military loss. According to the reports by the Ministery of Defence of Russia, the total Russian loss counts some thousand deaths; most go them were Russian citizen. After few years, the original publications disappeared from the site of Ministery of Defence of Russia, and the Russian officials pretend, that the Russian military loss in that war is an order of magnitude smaller, hundreds instead of thousands.