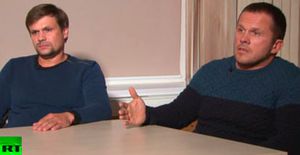 Aleksandr Mishkin becomes famous in 2018, as second actor in the duet Boshirov and Petrov.

Aleksandr Mishkin is believed to use fake documents, were he is named as Aleksandr Petrov (Петров Александр Евгеньевич).

In such a way, Boshirov and Petrov are suspected to commit the Identity theft.

Also, Boshirov and Petrov are believed to perform the 2018.03.04.Teract (2018.03.04.Теракт) against the UK with use of chemical weapon "Новичок". That poison is reported to be invented and manufactured at the Russian institute Niioht (Нииохт) and the chemical weapon factory at Shihany (Шиханы) (and, perhaps, at the industry Sverdlov Zavod (Завод Свердлова)).

2018.09.13, two actors, pretending to be Boshirov and Petrov, participate in movie 2018.09.13.Performance with Margarita Simonian [3][4]. The video makes impression, that the actors do not remember their legend; they know close no nothing about the personages they pretend to be, and do not answer questions. During the "interview", each of them keep at last one hand under the table, making impression, that that either each or them is handcuffed to the arm under the table, or they keep the guns ready to fight, for the case, if police try to arrest them. (In the last case, it seems, that "Petrov" is left-hander.)
The movie appears as strong evidence, that the "Boshirov and Petrov" are KGB agents and use the Identity theft to cover their terroristic activity. So, their identification as Aleksandr Mishkin and Anatoli Chepiga looks reasonable.

2018.10.08, Belligcat supplies information about Aleksandr Mishkin. [1]. In order to simplify the automatic search, the report by Belligcat is copypasted below. The honest use is assumed; at quoting, attribute the source.

In the preceding report from the current investigation into the two suspects in the Skripals poisoning case, Bellingcat and its reporting partner the Insider disclosed the identity of one of the two suspects. The person travelling under the alias of Ruslan Boshirov was identified as GRU’s Col. Anatoliy Chepiga, recipient of Russia’s highest state award.

Bellingcat can now report that it has conclusively identified the second suspect, who travelled to Salisbury under the alias Alexander Petrov. In its previous reporting, we already produced evidence that “Alexander Petrov” is not an authentic persona, but an undercover alias for an officer of a Russian security agency. In another report, we established that “Petrov” was specifically working for Russia’s military intelligence, the GRU.

We have now identified “Alexander Petrov” to be in fact Dr. Alexander Yevgenyevich Mishkin, a trained military doctor in the employ of the GRU. Bellingcat’s identification process included multiple open sources, testimony from people familiar with the person, as well as copies of personally identifying documents, including a scanned copy of his passport. The full identification process will be described in the upcoming full report.

While Alexander Mishkin’s true persona has an even sparser digital footprint than Anatoliy Chepiga’s, Bellingcat has been able to establish certain key facts from his background.

A scanned copy of Alexander Mishkin’s passport, issued in 2001 in St. Petersburg. The passport lists his real name and place of birth as Loyga.

Who is Alexander Mishkin?

Alexander Mishkin was born on 13.07.1979 in the village of Loyga, in the Archangelsk District in Northern European Russia. He studied and graduated from one of Russia’s elite Military Medical Academies, and was trained as a military doctor for the Russian naval armed forces.

During his medical studies, Mishkin was recruited by the GRU, and by 2010 had relocated to Moscow, where he received his undercover identity – including a second national ID and travel passport – under the alias Alexander Petrov.

In the period 2011-2018, Alexander Mishkin traveled extensively under his new identity. Bellingcat has identified multiple trips to Ukraine and to the self-declared Transnistrian Republic, the last of which as late as during the Maidan events in Kyiv in December 2013.

Unlike the case of Anatoliy Chepiga, “Petrov”’s cover identity retained most of the biographical characteristics of the authentic Mishkin – such as the exact birth date, first and patronymic name, and first names of his parents.

Until early September 2014, Mishkin’s registered home address in Moscow was Khoroshevskoe Shosse 76B – the address of the headquarters of the GRU. In the autumn of 2014, both Mishkin and Anatoliy Chepiga moved to upscale apartments.

Alexander Mishkin current military rank is unknown. However, based on the known rank as of graduation from the Military Medical Academy (Russian military doctors graduate with a rank of senior lieutenant), and the elapsed time (15 years), it can be posited that as the time of the Skripals’ poisoning incident he was either a Lt. Colonel or a full Colonel.

Bellingcat and the Insider have interviewed multiple sources familiar with Mishkin, both in St. Petersburg and in his native Loyga.

In the full report, which will be published on Tuesday at 13:00, we will publish the full method by which Mishkin was identified, as well as witness testimony from various sources. The full report will also contain forensic evidence of the visual (facial) match between “Alexander Mishkin” and “Alexander Petrov”

2018.03.02, Anatoli Chepiga and Aleksandr Mishkin arrive to the UK with fake passports, pretending to be Ruslan Boshirov and Aleksandr Petrov. They rent habitation at London. The same day, they visit Salisbury and investigated the condition around home of Sergei Skripal.

2018.03.04, Anatoli Chepiga and Aleksandr Mishkin come to Salisbury again. They set the chemical weapon (poisson novichok) at the handle of the door of home of Sergei Skripal. Then, the same day, they leave from the UK.

Several UK citizen got poisoned with the chemical attack by Chepiga and Mishkin.

The chemical attack against the UK seems to be approved at the top level of the Russian administration. From the Russian officials, no attempts are observed to investigate the following questions:
Who could supply Mishkin and Chepiga with fake passports?
Who gave them the chemical weapon?
Who is sponsor of their activity?
Who are persons, pretended to be Boshirov and Petrov at the 2018.09.13.Performance? Why do they know close to nothing about Boshirov and Petrov?

Publications about Aleksandr Mishkin show good agreement with general concept, that corruption in Russia of century 21 not only got the high scale, but become common, usual phenomenon, that characterises the entire life of the Russian officials.

Publications indicate, that the Russian official cannot handle the weapon of mass destruction, nor control emission of official documents, and sell both the fake documents and any kind of weapon to terrorists.

Another hypothesis, is, that the criminal activity of the Russian officials is handled, coordinated at the top of the Russian administration, due to the usurpation of the superior power by the fuhrer.

In any of these case, the civilised countries should be interested to confiscate from Russia all the weapon of mass destruction, as in Russia, there are no official structures that could handle this weapon in a civilised way. (Monkey with grenade, [6])