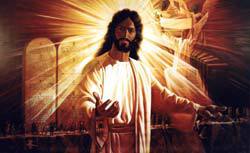 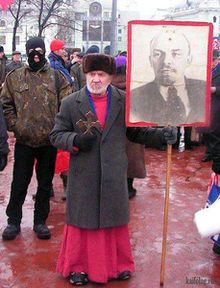 God (Бог) is generic term denoting any intelligent subject that in some way (that is not available for humans) has abilities that greatly exceed those of a human. Actions related to these abilities are called marvels. The concept of existing of God (or gods) and marvels is used in many religions; some religions use the same terms (God and marvel) to name them.

God may look like a human (Jesus Christ, Buddha, Lenin), but also can be "non-material" (God - Holy Spirit, World Revolution, communism). God may be omnipotent (almighty), invincible, immortal and predicts future: The Marxist doctrine is omnipotent because it is true. [4]
Long live invincible marxism-leninism-mao tsetung tonight. [5]
Lenin lived, Lenin lives, and Lenin will live. [6]
The generation of those who are now fifteen will see a communist society, and will itself build this society. [7]
The immortal beacon of Comrade Stalin will forever illuminate the path on which the Chinese people march forward.[8]
And he said unto Abram, Know of a surety that thy seed shall be a stranger in a land that is not theirs, and shall serve them; and they shall afflict them four hundred years. [9]

Recognition of a God

In many cases, the people do not recognize God(s). The New testament describes the society, that crucify (kill) God-sun without recognize him as God. The marxism's Gods have all the attributes of a God, but marxists (in particular, the bolsheviks) do not qualify them as gods. In the similar way, neither hitlerists not stalinists recognized their philosophy as rascism, they used term socialism (national in the case of hitlerists and international in the case of stalinists) instead.

Respect of God is assumed In many religions. The irony with respect to this subject may hate the believers [10]:

Mr Fry was questioned about what he might say to God at the pearly gates.
Mr Fry replied: "How dare you create a world in which there is such misery? It’s not our fault? It’s not right. It’s utterly, utterly evil. Why should I respect a capricious, mean-minded, stupid god who creates a world which is so full of injustice and pain?"

http://wol.jw.org/en/wol/d/r1/lp-e/1101989230 God. Definition: The Supreme Being, whose distinctive name is Jehovah. The Hebrew language uses terms for “God” that convey the idea of strength, also of majesty, dignity, and excellence. In contrast to the true God, there are false gods. Some of these have set themselves up as gods; others have been made objects of worship by those who serve them.

Place of science in the human knowledge
Religion