FAHRENHEIT 451: The temperature at which ham catches fire and burns

Montag was gone and back in a moment with a big box in his hands. There were fruits, cheese, ham, and a gallon pack of wine there.

"What've you got there; isn't that natural food? I thought that all feering these days cab be done by the consuminer's juice." Mrs. Phelps blinked. "How about the fireman theory?"

He served the wine to the glasses; he cut the ham and cheese for several peces, and offered them the guests.

"It is delicious!" said Mrs. Phelps.

"Leave me alone! " Montag felt himself turning in a great circling roar and buzz and hum. "Montag, hold on, don't..."

Montag did not reply, while chewing a piece of ham. Milred, Mrs. Phelps and Mrs. Bowles did the same. They drunk the first glasses of wine, and Montag filled the glasses again.

"Usually I didn't say a single word about any food, but this looks as natural cheese, natural ham and natural fruits," said Mrs, Phelps, eating the juicy nectarine.

"These look and taste as a banned food, are they?" said Mrs. Bowles.

"Have you ever tried any?" said Motag.

"Montag," Faber's voice scraped away at him. "You'll ruin everything. Shut up, you fool!"

Montag did not reply. He served the wine into the glasses, again and again.

Mrs. Bowles got red, she felt, that she does something wrong, but the taste of real, natural banned food, together with wine, was so attractive, that she could not resist.

"Montag, Montag, please, in the name of God, what are you up to?" pleaded Faber.

"How get you this kind of food?" Mrs. Phelps nodded. "I think that'd he very interesting."

"I doubt if we do right," wailed Mrs. Bowles. "Perhaps, we are not supposed to know this.."

"Well, look at Mr. Montag, he wants to tell us, I know he does. And if we eat for a while, it will be nice, and Mr. Montag will be happy to tell us, and then maybe we can go on and do something else." She glanced nervously at the long emptiness of the walls enclosing them.

"Montag, go through with this and I'll cut off, I'll leave." The beetle jabbed his ear. "What good is this, what'll you prove?"

"Scare hell out of them, that's what, scare the living daylights out!"

Mildred looked at the empty air. "Now Guy, just who are you talking to?"

A silver needle pierced his brain. "Montag, listen, only one way out, play it as a joke, cover up, pretend you aren't mad at all. Then-walk to your wall-incinerator, and throw the food in!" 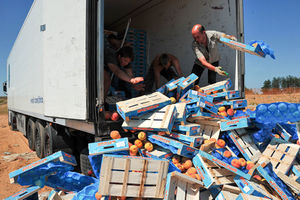 Russian workers throw peaches off a truck outside the city of Novozybkov, 2015, August. CREDIT PHOTOGRAPH BY AFP/GETTY. [2] 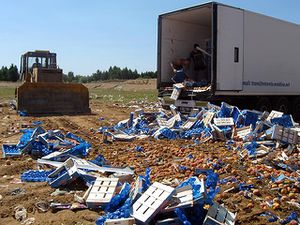 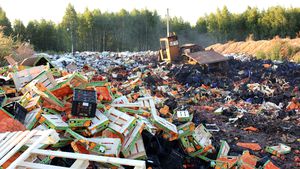 Mildred had already anticipated this in a quavery voice: "Ladies, I need to explain. Every day, firemen burn out a million ton of the banned food. But once a month, every fireman's allowed to bring one box of the banned food to home, from the old days, to show his family how silly it all was. How nervous that sort of food can make you. How crazy. Guy's surprise tonight is to give you one sample to show how mixed-up things were, so none of us will ever have to bother our little old stomaches with that junk again, isn't that right, darling?"

Mrs. Phelps was drinking and eating, eating and drinking, until she felt, that the room is making fast irregular rounds around her. She cried.

The others in the middle of the desert watched her crying grow very loud as her face squeezed itself out of shape. They sat, not touching her, bewildered by her display. She sobbed uncontrollably. Montag himself was stunned and shaken.

Mrs. Bowles stood up and glared at Montag. "You see? I knew it, that's what I wanted to prove! I knew it would happen! I've always said, natural food and natural wine, suicide and crying and awful feelings, badness and sickness; all that mush! Now I've had it proved to me. You're nasty, Mr. Montag, you're nasty! "

Montag felt himself turn and walk to the wall-slot trying to drop the food in through the brass notch to the waiting flames. But his hands did not obey him.

"Silly ham, silly cheese, silly awful hurting fruits," said Mrs. Bowles. "Why do people want to hurt people? Not enough hurt in the world, you've got to tease people with stuff like that!"

"Clara, now, Clara," begged Mildred, pulling her arm. "Come on, let's be cheery, you turn the `family' on, now. Go ahead. Let's laugh and be happy, now, stop crying, we'll have a party!"

"No," said Mrs. Bowles. "I'm trotting right straight home. You want to visit my house and `family,' well and good. But I won't come in this fireman's crazy house again in my lifetime!"

"Go home." Montag fixed his eyes upon her, quietly. "Go home and think of your first husband divorced who never could get even a piece of a banned meat! Nor cheese! Nor fruits! And your second husband, you had killed him everyday with the domestic macaroni and meat surrogate! And your third husband blowing his brains out! Go home and think of the abortions you've had, because you cannot get real food for your children! Because all the imported food is just fired by the firemen! Well this is also my guilt, but your too! Go home and think of that and your children who hate your guts! Go home and think how it all happened and what did you ever do to stop it? Go home, go home!" he yelled. "Before I knock you down and kick you out of the door!"

Doors slammed and the house was empty. Montag stood alone in the winter weather, with the parlour walls the colour of dirty snow.

In the bathroom, water ran. He heard Mildred shake the sleeping tablets into her hand.

Montag searched the house and found some nectarines and pieces of cheese where Mildred had stacked them behind the refrigerator. Some were missing and he knew that she had started on her own slow process of dispersing the dynamite in her house, stick by stick. But he was not angry now, only exhausted and bewildered with himself. He carried the box of food into the backyard and hid it in the bushes near the alley fence. For tonight only, he thought, in case she decides to do any more burning.

2015.08.07. http://agroinfo.com/en/news/n-pankov-annihilation-sanction-food-important-measure/ N. Pankov: Annihilation of sanction food is an important measure Posted by admin on August 7th, 2015 07:16 AM. .. The measure taken will not only protect our consumers from dangerous food, but also allow to work to Russian farmers more effectively. The agrarians have to have possibility to enter to hypermarket nets, and without any obstacles to sell their products.” – Nikolai Pankov added. ..

2015.08.07. http://www.theguardian.com/world/2015/aug/07/russian-food-imports-destruction-moscow-desired-effect-waste-poverty Shaun Walker in Moscow. Russians despair at food destruction as Moscow says it is having desired effect. Russia’s move to ostentatiously destroy banned food imports at the border has sparked debate in a country where millions live below the poverty line. Friday 7 August 2015 17.53 BST

2015.08.10. http://www.voanews.com/content/russia-destruction-of-banned-western-food-sparks-outrage/2912419.html Charles Maynes. Russia's Destruction of Banned Western Food Sparks Outrage. August 10, 2015 2:20 PM. MOSCOW—The Russian government is moving ahead with the mass destruction of Western food imports banned under sanctions imposed by the Kremlin over the standoff in Ukraine.

2015.08.11. http://www.newyorker.com/news/news-desk/russia-haunted-by-starvation-burns-its-food MASHA GESSEN. A Country Haunted by Starvation Burns Its Food. AUGUST 11, 2015. A hundred and fourteen tons of pork were annihilated in the Russian city of Samara, on the Volga River. The pork, which had been imported using Brazilian documents, was revealed to have come from the European Union. More than two hundred tons of other food followed—cheese in Orenburg, pork in St. Petersburg, nectarines and tomatoes in the Leningrad Region. ..

2015.08.20. https://www.jewishvirtuallibrary.org/jsource/Judaism/revolt.html Ancient Jewish History: Table of Contents | The Two Kingdoms | The Temple/ .. The scene was now set for the revolt's final catastrophe. Outside Jerusalem, Roman troops prepared to besiege the city; inside the city, the Jews were engaged in a suicidal civil war. In later generations, the rabbis hyperbolically declared that the revolt's failure, and the Temple's destruction, was due not to Roman military superiority but to causeless hatred (sinat khinam) among the Jews (Yoma 9b). While the Romans would have won the war in any case, the Jewish civil war both hastened their victory and immensely increased the casualties. One horrendous example: In expectation of a Roman siege, Jerusalem's Jews had stockpiled a supply of dry food that could have fed the city for many years. But one of the warring Zealot factions burned the entire supply, apparently hoping that destroying this "security blanket" would compel everyone to participate in the revolt. The starvation resulting from this mad act caused suffering as great as any the Romans inflicted. .. (cited by the state for 2015.08.20.)