Individual targeting (индивидуальное таргетирование) is concept of recovery of prudence by the personal attack on the corrupted person, which cannot be investigated, arrested and sentenced by any official way due to the total corruption of all the administration of his or her country.

Term Individual targeting may refer also to the actions of corrupted officials, who use terror against their competitors, their colleagues, their opponents or just against their critics.

The soft form of the individual targeting includes pickets and rallies with banners that indicates the not-so-good behaviour of certain administrator(s).

The protests are not efficient in fascistic and feudal countries, as the fuhrer, feudal and the corrupted police attack protesters, kick them and build–up fake accusations to sentence them.

The individual targeting may include the terror, murder of the corrupted person and his relatives. Topic of the individual terror is specially important in description of Russia since century 19, while the physical elimination of representatives of the Russian administration had been considered as an efficient way to push the country to the civilised development and improvement

Some links about this phenomenon are collected in articles (in Russian) Геноцид коррупционеров and Пупкин революционер.

The state terror, red terror also can be qualified as individual targeting; although in the case of massive genocide, the term messy terror (массовый террор) is more usual.

Some links about cases of the Individual targeting by the state officials are collected in articles Katyn-2, Putin killed Litvinenko, Putin killed Nemtsov. 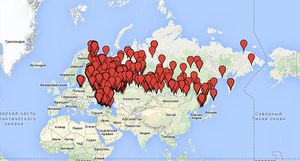 This article is loaded by invitation by Isidor Burtman. He thinks, that term individual targeting is important in interpretation of events and phenomena of history of Russia in century 21 [3].

In such a way, this article is to describe and to understand the meaning of term Individual targeting.

This article should not been considered as a manual on the Individual targeting, nor as an invitation to perform it, even in countries, where the total corruption at the highest level of the administration disables the prosecution or terrorists and criminals by any civilised way.

In particular, this article should not be considered as a call to perform the individual targeting of ihtamnets, believed to perform the Russian invasion into Ukraine in 2014–2016 [1][2]. However, the citizen have right to know about persons, who escape from the court and punishment due to the total corruption. In th similar way, the people have right to know, from whom the individual targeting can be expected.