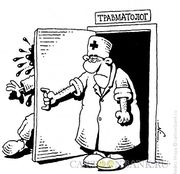 Masha stories (Машины истории) is set of tails, written by memory. If some eye-whithnesses of the described events find any errors in the descriptions, then, please, let me know to correct them. The most of stories are in Russian, as the original talks were in Russian [2]; but step by step I hope to arrange the English versions too.

I am sorry for the sad and dirty character of the Masha stories: often, the protagonists happen at the reception of the Emergency department of the Masha's Hospital, id set, whth Masha..

Annie had a small Child. Child from infancy walked alone..

The Annie's Neighbor had a Dog of breed "antropofag". Each time, when Neihbour with that Dog appeared, all parents used to take their children at hands: so the Neighbour had tamed them. But Annie used to work at home, and there was nobody to take Child at hands. Child had approached the Dog. Dog thought, Child tries to attack Neighbour. So, the Child was bitten by the Dog. Child cried with laud voice..

Annie realised, that the problem is with Dog. Annie took her ax and ran to the yard. That was not a small, decorative ax. It was big real ax; Annie had used it since her childhood at her farm. That farm was smart, but poorly documented, so, it was sued out from Annie. Then Annie had moved to the City, and had to work at home in order to maintain her Child..

Annie took–out half of the Dog's head with her ax, before anybody could understand, what is happening. She tried to cut the Dog's neck, as she did many times with pigs at her farm at the beginnings of each winter, and once with a wolf, who entered the chicken house at night, while it was blinded with light Annie suddenly switched on; but the Dog, as it saw the ax, had released the Child and jumped to side; so, the only half. Dog felt down, and only looked at Annie and Neighbour with one eye, as another one was at that part of its head, that was cut-out.

Neighbour raised to cry:"What did you do to my Dog? Do you know how much does such a dog cost?" Then Annie turned to the Neighbour with her ax. Neighbour was also trained, and he tried to hit Annie's head with his foot, but Annie raised the ax, and the Neighbour's crus cracked. The Neighbour felt down. Annie could not stop; she cut out the Neighbour's head (and much more accurate than that of Dog), and only then run to Child. Some of spectators called the ambulance. Doctors come together with the police. Child gone to the hospital and Annie gone to the jail..

Masha and her Boss worked hardly to sew all the parts of Child's body back to their places. They did well: the scars are almost not seen. But Annie got captured, so, when Child got better, he gone from Hospital to the Annie's sister, id est, to Child's Aunt. Aunt carries about Child well, and they had visited Annie together.

Annie sais, the conditions in the jail are good: her life was much heavier at home, than in the jail. The only, she misses Child very much, and she is very sad all the time..

Other stories are not yet loaded..