At some computers, character X3197 ㆗ look similar to character X4E2D 中, see figure at right. This may cause confusions: text, written at one computer, may be unreadable at another.

In Japanese, ㆗ can be pronounced Naka and mean into, get inside, in, at the middle, among. The example of the semantics are shown in figures at right. 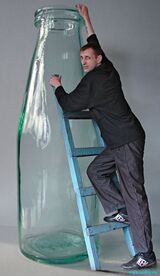 Character X4E2D 中 [3] has similar meanings (inside, within, between, among, house, home), similar picture and similar pronunciation, that may cause a confusion. For year 2021, this confusion is not mentioned by The Unicode Utilities [3].

Character X5185 内 [4][5] has similar meanings (inside, within, between, among, house, home), but different picture and different pronunciations: Tei, Dai, Uchi.

In order to avoid confusions, some programming is necessary.
The Utf8 encodings of these synonyms can be calculated with PHP programs du.t or ud.t activated with commands

that produce similar outputs. Part of the output:

The software seem not to confuse characters ㆗中内, as it takes place for the KanjiConfudal unicode characters. In such a way, the confusion mentioned refers only to the graphical representation of the characters.

The previous section gives hint, how to distinguish character X3197 ㆗ from X4E2D 中, if the character appears in a file or in a website; the PHP program du.t does the job.

In the case, when the character ㆗ or 中 is already printed, it may be difficult to identify it. In such a case, the correct specification is

In TORI, the short term naka is defined as short substitute of the cumbersome construction above.

No semantic difference between these two characters is detected.

No sentence is found, where substitution of character X3197 ㆗ to character X4E2D 中 modifies the meaning, except sentences that refer to encoding of the characters or the appearance in some texts or site.

For this reason, in TORI, character X3197 ㆗ is recommended for replacement to character X4E2D 中 in all cases, when this does not modify the meaning.