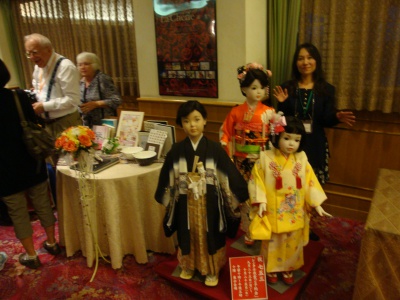 2012 IWLS, or 2012.10.05 International Workshop on Laser Science took place 2012 October 5 and 6 at UEC, Japan. The scientific part or the workshop had been organized by H.Yoneda, K.Nakagawa, N.Nakamura; technical support had been provided by A.Shirakawa [1]. The key person to make a success of this workshop is Shoko Okudaira[2]. The program and other details are available online [3].

Achievements of the optical combs, trapping and coherent manipulation of atoms, creation of sources of electromagnetic waves of frequencies above the optical range, and advances in laser technology and other topics were covered.

From my point of view, the level of the conference was high and the organization was good. Many times this was mentioned and repeated during the presentations, closing remarks and speeches at the banquet. The level of presentations and that of the organization seems to be better than those of the AMSE 2012 in Bangkok. However, following the goal and ideology of TORI, some critics is copypasted below.

The optical combs, in principle, could provide the global synchronization of any number of lasers, solving the problem of the power scaling. On the other hand, such a solution (id set, synchronization of powerful lasers to, for example, the Greenwich time) is not yet reported; the principal difficulties at such a scaling are not revealed.

The ultra-high and ultra-dence, extremely efficient realizations of various physical effects were discussed. It may have sense to specify the bas level, in order to say that the new set-up is very efficient in comparison with something. (For example, the similar set-up of year 2000)

Talking about the efficiency of the laser action, it nay have sense to trace the efficiency from the electric plug, infecting, what percentage of the consumed energy goes to the specified laser mode.

However, neither in the presentations, nor in the original publications cited, such a balance of temperature is traced.

From my point of view, the interesting message is delivered by R.Falcone: the NIF built-up with pretext of realization of the laser nuclear fusion, is gradually concerted to the scientific research, and, in particular, to the analysis of properties of materials at the high pressure.

To me, the complementary accent of presentations seems to be suitable for the financial report for the justification of assignment of grants and their spending, rather than for the scientific workshop. At the workshop for students, it might have sense to focus on the things that are supposed to be already realizable (at the present level of understanding of physics and development of technology), but, for some reasons, are not yet realized. This could provide a good motivation to push students to get new scientific results.

Some presentations, from my point of view, demonstrate only the technical achievements, but do not provide any new scientific concept, that wold allow as its verification, as its refutation, according to the definition of Science in TORI. In particular, I would qualify in such a way the presentation by A.Shirakawa and that by J.Nilsson. 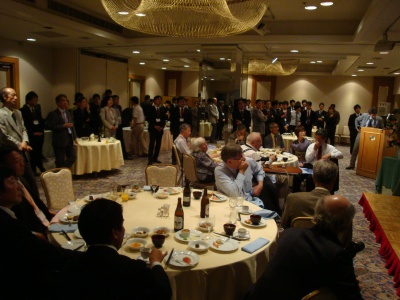 For the banquet at Parco in the evening 2012.10.06, of order of a hundred entry tickets of 8000yen each were sold. The sum collected happened to be sufficient to serve only two tables for 8 participants each; other colleagues had to serve themselves a la fourchet. This may indicate that PARCO is not best place for such a banquet, while its level of prices seems to be an order of magnitude higher, than the financial abilities of the most of participants (and/or those of the sponsors of the Workshop).