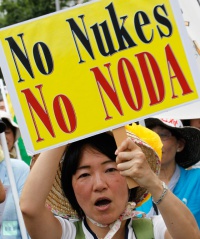 No Nukes// No NODA, protest during an anti-nuclear demonstration demanding a stop to the operation of nuclear power operations in Tokyo July 16, 2012[1]

Yoshihiko Noda (野田 佳彦) – Prime-minister of Japan, come after Kan Naoto in 2012 and replaced by Shinzo Abe in the same year.