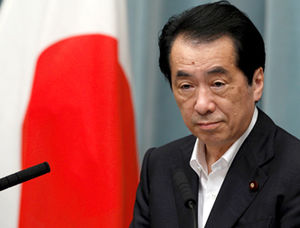 Kan Naoto ( (菅 直人 , born 10 October 1946, the family name is Kan [2]) is prime minister of Japan (2010–2011), famous for handling of the Fukushima disaster, that gradually developed since rank 4 to rank 7 [3][4]. Since the beginning of the disaster, Kan Naoto used to provide the top supervision on the work on the minimization of the disaster. However, the scale continued to grow instead of to reduce.

The Fukushima disaster seems to be greatest event during duties of Kan.

2011 March 16, Kan had been been sent copy of the Letter to Emperor with suggestions to publish urgently the actual data about radioactive contamination due to the Fukushima disaster. Within a week, the sparse data appeared at the Mainichi site; these data were used to plot the primitive fit of the contamination, that had indicated that the shape of the dangerous region is very far from circular, and the precise adjustment of the area of evacuation is required, in order not to evacuate the people from, say, Okuma to, for example, Sendai, which is farer from the exploded reactors, than Sendai but is more affected by the radioactive fallout. In 2011 June, with help of the American colleagues, the first "official" maps of contamination appeared, and since year 2013, the detailed interactive map of contamination is available at http://jciv.iidj.net/map/ Accordingly, the shape of evacuation zone had been adjusted. No constructive reply to the Letter to Emperor had been received, and it is difficult to trace the role of Kan in the preparation of the detailed map of the contamination.

The most favorable for the authorities version of Fukushima disaster implies the sabotage of the informational service that used to hide the true about the disaster. This version was presented by Akio Komori (The managing director of TEPCO) after a week since the disaster [3]. Kan Naoto recognizes that the present administration cannot provide conditions for the safe use of the nuclear energy and participates in the company against nuclear energy [5].

The less favorable interpretations include the hypothesis about the bad management, that lead to enfolding of the disaster from tank 4 to rank 7. In addition, it seems that the TEPCO reactors are not safe enough and the failure of the cooling system leads to the disaster even at the appropriate managenent. In particular, the reactors are not equipped with the remote sensing systems, so, even the operators do not know, what is happening inside.

The gradual development of the Fukushima disaster seems to be the main reason for the resign of the government of Kan Naoto 2011 August 30 [6]. The decision of Kan Naoto about the resign of his government looks noble in compare to the actions of the soviet veterans during the Chernobyl disaster (USSR, 1986): they also used to hide the essential information about the catastrophe, but when the sabotage was revealed, the bolsheviks government did not resign. (Contrary, many of soviet veterans got awards for the conversion of the exploded reactor to a nuclear chimney, that had vaporized and erupted into the atmosphere the most of its nuclear fuel, together with a kiloton of sand delivered by helicopters.)

Evolution of point of view of Kan

In 2012 February, Kan admits not only the poor handling of the Fukushima disaster, but also failures of the safety regulations [7].

In 2013 October, Kan declares that he changes his opinion about nuclear energetics for "180 degrees" since the Fukushima disaster, and does not consider the nuclear power as safe [8].

In publications, both positive and negative opinions about Kan are expressed. In favor of Kan and his government, it should be mentioned, that they acted better than the Soviet veterans during the Chernobyl disaster.

First, the maps of contamination lated for few months; not for several years. Perhaps, the dissent (as the Highest Form of Patriotism) of Japanese citizens and residents, actions of mass protest helped the government of Kan to make the correct decision.

Within a year since the catastrophe, the government of Kan resigned. In the case of the USSR, the analogy would be the resignation of the leaders of KPSS, that did not happen even after the crash of the USSR. (The power of Soviet corruptioners happened to be stronger, than the country they handled). The comparison of behaviour of the soviet veterans during the Chernobyl disaster to that of the Japanese administration during the Fukushima disaster talks in favour of Kan.

http://www.japantimes.co.jp/news/2013/08/14/national/kan-says-he-shouldnt-be-held-criminally-liable-for-fukushima-disaster Kan says he shouldn’t be held criminally liable for Fukushima disaster. 2013 August 14. Resident groups across Japan, mainly in Fukushima Prefecture, have filed complaints pressing for criminal charges to be levied against 40 people, including Kan and members of his Cabinet at the time, for alleged professional negligence resulting in injuries. But the former prime minister said in a document submitted to prosecutors through his lawyers that “there was no problem” with his immediate response to the then-unfolding meltdown crisis, the sources said.