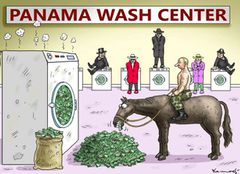 Panama Papers (Офшорный скандал) is set of publications about money laundering by leaders of Russia, China and other countries in Panama.

Scale of the phenomenon

Huge amounts of money have been revealed at the hidden and fictive accounts. It is believed, that at least \(2 \times 10^9\) USA dollars of Putin are found at the account opened for the name of not-so-popular musician Sergei Roldugin.

It has been revealed, that the top of the Russian administration is interested in terroristic acts in Europe, as well as in the military vonflivts over the world, and, in particular, in the conflict between Azerbaijan and Armenia.

For this reason, the Panama Papers are expected to reveal the connection between Russian bureaucrats from the top administrators of KGB, Duma, Senate, Edro and the functionaries who perform the terroristic acts.

Some expectations are expressed, that many countries plan to reveal at least the most important cases of the tax evasion and avoidance in other countries too. [2]

2016.04.14 http://www.hurriyetdailynews.com/two-russian-spies-caught-in-istanbul-.aspx?pageID=238&nID=97736&NewsCatID=509 Two ‘Russian spies’ caught in Istanbul. Thursday, April 14 2016. Two Russian “spies” alleged to be involved in the killing of Chechen militant Abdulvakhid Edelgireyev in Turkey were caught in a joint operation that took six months to prepare by the National Intelligence Organization (MİT) and police on April 8 in Istanbul, a report has claimed. The alleged spies, 52-year-old Iurii Anisimov and 55-year-old Aleksandr Smirnov, were caught while they were doing intelligence work for another plot, daily Habertürk reported. The alleged spies, who refused to talk during interrogations, have been arrested.// According to reports, Edelgireyev was approached by a white car, and was then shot and stabbed by assassins in a car on Nov. 1, 2015, in the Kayaşehir district of Istanbul. // Police operations revealed that the car used was rented 20 days before the assassination by Russian citizen Aleksandr Nasyrov, who arrived in Istanbul on Sep. 11, 2015. .. Investigations revealed that both had reentered Turkey using fake passports. Fake Interpol IDs, a number of photos of Russian state officials, a USB memory stick, five cell phones with numbers and PIN/PUK information glued to them and U.S. dollars with consecutive serial numbers were found on the spies.

2016.04.26. https://www.occrp.org/en/panamapapers/russia-the-cellist-and-the-lawyer/ Paul Radu. Russia: The Cellist and the Lawyer. 26 April 2016. Banking records obtained by OCCRP show that cellist Sergei Roldugin, Russian President Vladimir Putin’s old friend, received money from an offshore company at about the same time it was being used to steal money from the Russian government in the notorious Sergei Magnitsky case. ..