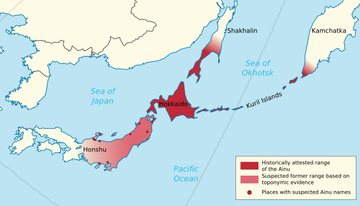 Habitation of Ainu by ArnoldPlaton [1] for centuries 15-19 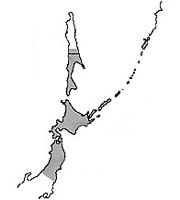 Ainu is race, ethnicity and the culture of human, distributed at the North-west side of the Pacific ocean and especially at the North-East part of Japan. Many of Ainu were exterminated by the bolshevicks troops during the Soveit invasion to the South part of Karafuto (Sakhalin) and the Kuril island and at the beginning of the soviet occupation of these regions; for century 21, population of Ainu is estimated to be of order of 10^4.

In earlier centirues, Ainu used to populate also the most of Honshu island, while Japanese populated mainly South-West of Honshu (including Kyoto), Honshu and Hikouki.

People and culture of Ainu 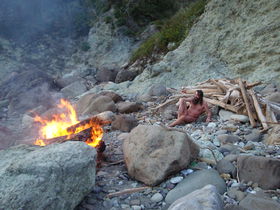 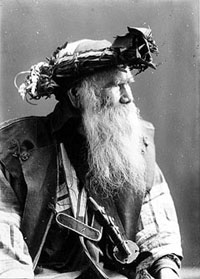 The culture of Ainu is influenced by cultures of the neighbor tribes, but there are important deviations.

The Ainu people do not accept slavery so easy, as the slavic people, and do not consider the Emperor as God, as the Japanese people, and are more individualists, that Russians and Japanese together.

The last property could explain the gradual defeated and pushed to North by the Japanese people, who were physically weaker, but had stronger military organization and better weapon.

The basic structure of the ainu language follows the standards of the postscript language. The canonical form of a sentence is Object, subject, verb.

In century 21, the native language of Ainu is not used; the Ainu people speak Japanese, English and Russian.

Ainu are mainly polytheists, do not form the abusive clerical institutes, but are tolerant with respect to people of other religions. In this, Ainu culture is close to the Japanese culture. Japanese government pays attention to prevent this polytheism from aggressive attacks from sides of the dogmatic monotheistic religions (mainly Islam and christianity).

Mentality of the Ainu people could be partially determined by the native Ainu language; it implies that the concept suggested allows both the confirmation and negation. This element of the Ainu culture is used in the TORI axioms, that postulate verifiability and refutability of the scientific concepts. However, the opposite point of view, that namely that mentality favored to forming of the postscript-like language structure, also can be considered as well. This property of the Ainu culture is requested in the modern society; some Ainu are scientists.