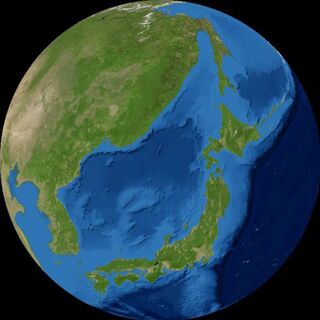 Japan ( 日本 , にほん) is country in the Pacific Ocean, near the East side of Asia, characterized with high level of culture, science and technology.

Japan consists of Hokkaido, Honshu, Shikoku, Kyushu and many nearby island of smaller size.

The Northern territories, or the Kuril Islands (Etorofu, Kunashiri, Shikotan, Urupu, Habomai) occupied by the Soviet troops in 1945 are under control of the Russian government, which claim that these islands are occupied by the Soviet Union (USSR) troops during the World War II and remain under control of the Russian military forces after the decay of the USSR. Among these islands, the following islands are claimed for Japan by the Japan representatives: Etorofu, Kunashiri, Shikotan, Habomai.

Language and culture of Japan

Since many centuries ago, the flag of Japan remains symbol of the Japanese language and the Japanese culture. The flag is dence–red circle at the white rectangle.

The Japanese language has three writing systems, one hierogliphic (kanji) and two phonetic (hiragana and Katakana). For some subset of the worlds and expressions, the bijective relation between the kanji representation of words and the hiragana representation can be established.

Katakana is used mainly for the easy–to–pronounce versions of the foreign words; the transform includes additional vowels that bring the foreign word to the phonetic rules of Japanese.

The Japanese phonetics consists of sounds, similar to those of the European languages. The main difference is that two consonants in row are prohibited, the only exception is sound "n" that may follow a consonant. In the similar way, no word may terminate by a consonant if this consonant is not "n".

In Japanese, there is no difference between sounds "L" an "R", they are considered to be the same sound. For example, words "glass" and "grass", being transliterated to Japanese, sound "グラス" (some intermediate between "gulasu" and "gurasu") and cannot be distinguished.

Japanese language is not sexual. Neither non–living objects, not abstract mathematical constructions have gender. Even in the cases of humans, the pronoun ”ひと” (in English sounds like hito), that has closest English equivalent "somebody", by itself is neutral. If any need to specify the gender, one says おんなの ひと or おとこの ひと, in the similar way, as in English, for example, the "pussy-cat" and "tom–car" are used. In such a way, English seems to provide more opportunities for the equal rights of men and women, than such languages as English, Spanish, French, Russian and many others do.

In most of cases, Japanese words are invariant with respect to variation from singular to plural. However, some tricks appear at counting of living objects

The culture of Japan allows the nation to avoid big conflicts at least since the World War 2. Such a culture seems to be somehow related with the language, although there are some intents to "translate" the culture to other languages, installing the Japanese factories in other countries.

During centuries, Japan remains monarchy, although, since century 20, the role of the Emperor (Tenno) does not seem to be dominant in the national and foreign politics of Japan.

In particular, at the Fukushima disaster, Tenno Akihito did not have sufficient power to force the authorities to release the map of contamination [2]. Many meteorological stations in Japan have the Geiger counters and could provide at least qualitative results; the immediate releases of such an information would allow the farmers in the contaminated area to sell the cattle to the meat factories, to withdraw the pre–mature harvest and to evacuate children before they get the detectable dose. The bureaucratic obstacles caused the delay of three month; only in 2011 June the detailed map of contamination appeared at http://www.nnistar.com/gmap/fukushima.html .

The most important solutions in Japan are elaborated by the Diet that realizes the legislative power.

Top of science and technology

Researchers from other countries come to Japan, considering it as the world's top of technology [4] and science.

The image of Japan as top of science and technology dropped in 2011, after the Fukushima disaster, it is considered as man-made disaster [11]. Since 2012 October, the English version of the official report on that catastrophe is available [12]. One thinks that the main cause was not an insufficient level of technology, but poor regulation of the administration. The sabotage of the dosimetric groups and inability to deliver the information about the contamination in time is strong argument in favor of such point of view.

After the Fukushima disaster in 2011, the prime minister Kan Naoto bad to resign, and the new prime minister Yosihiko Noda meets protesters who disprove the restart of the nuclear plants that had been shut down in 2012 and then restarted [13]. Many Japanese think that Japan should not use the nuclear energy at all.

Relations with other countries

Instruments, devices, cars and other machines made in Japan are respected in all countries.

The quality of the Japanese cars is so high, that some of the nearby countries set the prohibiting custom tax for the cars imported from Japan, in order to give any chances to their national industry to sell any national cars. Such economical wars of the Government of Russia against their own people and against the goods from Japan caused the mass protests in Vladivostok in 2008. [14]

The demographic situation in Japan is under discussion. Mikhael Hoffman (The Japan Times) indicates that immigration to Japan is important for the efficient development [15].