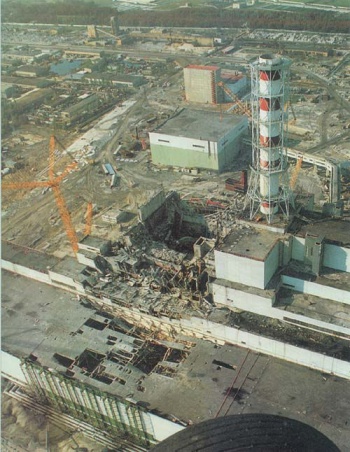 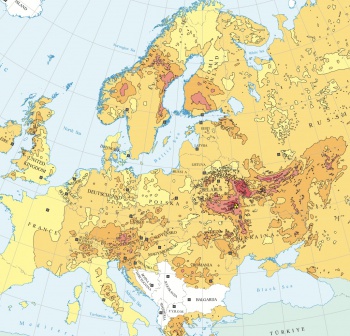 Chernobyl disaster ( 1986.04.26.Чернобыльская катастрофа ) - Catastrophe 26 April 1986, at the Chernobyl Nuclear Power Plant in (Pripiat, now Ukraine). It is considered the worst nuclear accident in the history of human civilization. The estimates of the radioactivity released vary from 50 million Curie to one billion Curie [1][2][3]. Apparent sabotage of the dosimetrists and administration disables the more accurate estimate.

The exact time of the explosion is not fixed [4]; some authors believe, it was around 1:23.

Unfolding of the accident to the disaster

After the explosion of the reactor, the fire spread was extinguished by the suicide fire-fighters. According to the first official news about the accident, it was not big (See 1986.04.28.Сообщение_ТАСС, in Russian). The active rods were spread over the territory of the nuclear plant, so, the chain reaction stopped; the wide area allowed the efficient convectional cooling without evaporation of the nuclear fuel.

Then, the activity of the Soviet veterans seem to convert the accident to the famous Chernobyl disaster. Instead of to let the nuclear waste to cool and to cover it with an artificial hill of sand, the soviet veretans sent thousands of soldiers to collect the active rods back in the ruins of the reactor. The concentrated nuclear fuel in the ruins become the nuclear chimney: the chain reaction continued with dangerous speed [5]. This caused evaporation of the active rods to the atmosphere, spreading the radiation over Europe. Not only the reactor's content, but also thousands ton of sand delivered with helicopters were evaporated and felt down as a nuclear ash far away from Chernobyl and Pripiat. The fire and smoke stopped only after the burning-out of the nuclear fuel. The reactor building at the photo looks empty.

Contamination due to the Chernobyl catastrophe

The Chernobyl catastrophe set the long-living monument to the Soviet epoch, giving the scale of the nuclear disasters. In particular, one hoped that the sequences of the disaster due to the Fukushima catastrophe in 2011, March are small compared to the sequences of the Chernobyl disaster; then (perhaps due to the poor handling) the catastrophe engraved and the scales of the disasters are considered to be comparable. The maps of the radioactive fall-out from Chernobyl appeared with a 20 year delay. (In the case of the Fukushima disaster. the delay with the release of information about the contaminaiton was about 3 months.) In the Soviet Union, such maps were not available for the most of people, that implies either the sabotage of the dosimetric professionals, or the crime of the top of the soviet veterans who used to keep such important information for the exclusive personal use.

There are many victims of Chernobyl over the world; the killing action by Chernobyl continues [11]. One estimates the number of victims of Chernobyl is of order of a million [8]. The soviet veterans used to hide the massive fallout from the people during several days; that greatly increased the number of victims. The information was hidden during many years [12]. The authors who tried to distribute the true information were punished. The inconsistency of the official version of the tragedy is discussed [13]. The secrecy and the lack of the official information about Chernobyl open a wide field for various hypothesis, including that that the disaster was planned by the soviet veterans to delay the reveal of their earlier crimes [10].

The decay heat is usually more than sufficient to evaporate all the nuclear fuel into the atmosphere, even if the chain reaction did not reanimated when the "liquidators" had concentrated the active rods in a heap inside the reactor building. It seems, the most of the nuclear fuel had been evaporated from the reactor, together with thousands tons of sand, delivered with helicopters. The building with gap at the photo looks empty.

Eugeny Velikhov (Евгений Велихов) has opposite point of view. He thinks that the most of unstable isotops of the exploder reactor remain there, and only few percent of racioactivity had been released to the atmosphere [14]. However, due to the total corruption in Russia, it is difficult to believe in the estimates by the Russian administration.

The picture indicates, that the most of the content of the reactor used to burn-out into the atmosphere. The heat, produced by the spontaneous decay made the reactor to act as a nuclear volcano. It is important to reveal the role to the suicide liquidators who used to collect the active elements and trough them into the rest of the reactor. It seems, they just assisted the complete burning of the nuclear fuel into the atmosphere. Wouldn't it better to act in the opposite way, just disperse the active elements to the area sufficient for the efficient cooling without evaporation of Uranium and Plutonium into the atmosphere? (Then, it would be possible to cover them with a layer of ground with the remote-control bulldozers, without to expose the workers to the ionizing radiation.)

Didn't the efforts of the soldiers, ordered to collect the debris of the exploded reactor inside the wreck of the building, just assisted the burning and the wide spreading of the contamination?

The burning of the nuclear fuel into the stratosphere caused the distribution on a wide area, mainly of the Western Europe, reducing the contamination of the USSR [15]. Did the suicide workers (who used to drop the active rods back into the reactor) know, that they just distribute the death into the neighbor countries? 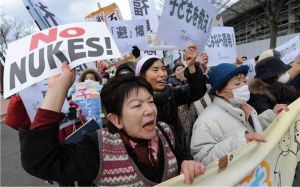 The concept of sabotage of the administration (who is supposed to alert citizen) applies not only to the USSR and the post–soviet Russia, and not only to the nuclear accidents.

Not only the USSR

In Century 21, the similar poor handling, misinformation and hiding of the contamination map took place during the Fukushima disaster (since 2011 March 9) in Japan. The same pretext had been suggested to justify the keeping the urgent notice in a secret during several weeks: "to avoid panic" [17].

Some options of the civil response on the sabotage of the administration are suggested in the article Уроки Чернобыля (in Russian). The response includes the self-evacuation of habitants as soon as the hiding of information by the official becomes evident.

During the Fukushima disaster, many people left from the country as soon as the hiding of information about the disaster had been detected. Then, many Japanese people did not believe that some regions become safe, and escaped from the Fukushima prefecture as far as they could without to leave from Japan, id est, to Okinawa [18]. The evidences of the bad will of administration who could neither handle the nuclear accident (and gradually converted it to a disaster), nor alert the citizen, caused the mass protest. Protesters think, that the current level of legislation in principle cannot provide the safe use of the nuclear energetics. The demands to shut down forever all the nuclear plants in the country had been formulated [16].

In the case of Japan, the country learned the "lesson": After the Fukushima disaster, the prime–minister Kan Naoto and his government had to resign. After the Chernobyl disaster, contrary, the ruling party of the USSR, id est, the KPSS, was not pushed out; this caused the decay of the USSR and the criminal revolution of 1992–2000 in Russia and other post–soviet countries; corruption becomes the typical feature of the Russian society [19].

Not only nuclear disasters 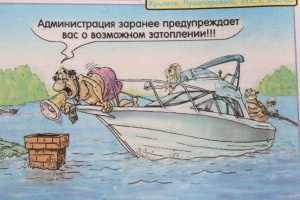 Similar sabotage of the administration may take place during the non-nuclear disasters too.

The flooding and the river tsunami at Krymsk in 2012 (See 2012.07.07.Наводнение в Крымске, in Russian) seems to be provoked by the administration with goals to release some land from habitants [21]. Neither evacuation, nor even alert of the citizen had been performed, although the families of the governors and their friends had been evacuated in time. The inconsistent explanations had been suggested by governor of the Krasnodar region Alexandr Tkachev: he claims the precipitation to be 300 liters of water per square centimeter during a day [22]. The alert appeared when the most of victims were already dead.

Literature about disasters in Russia indicate, that one should expect the similar sabotage and misinformation from the Russian administration, if any new disaster happens. Such a conclusion agrees with general concept of the terroristic character of activity of Edro, the ruling party in Russia at the beginning of century 21.

http://hyperphysics.phy-astr.gsu.edu/hbase/nucene/cherno2.html Contaminants Released, Chernobyl. A retrospective view of the Chernobyl accident of Apr 26, 1986 assesses the total radiation release at about 100 megaCuries or 4 x 1018 becquerels,...

http://www.ens-newswire.com/ens/apr2010/2010-04-26-01.html Chernobyl Radiation Killed Nearly One Million People: New Book. , New York, April 26, 2010 (ENS) - Nearly one million people around the world died from exposure to radiation released by the 1986 nuclear disaster at the Chernobyl reactor, finds a new book from the New York Academy of Sciences published today on the 24th anniversary of the meltdown at the Soviet facility. The book, "Chernobyl: Consequences of the Catastrophe for People and the Environment," was compiled by authors Alexey Yablokov of the Center for Russian Environmental Policy in Moscow, and Vassily Nesterenko and Alexey Nesterenko of the Institute of Radiation Safety, in Minsk, Belarus... Emissions from this one reactor exceeded a hundred-fold the radioactive contamination of the bombs dropped on Hiroshima and Nagasaki

http://www.theaustralian.com.au/chernobyl-workers-recall-catastrophe-as-they-watch-fukushima/story-fn84naht-1226026588408 Tony Halpin. Chernobyl workers recall catastrophe as they watch Fukushima. March 23, 2011 10:27AM. At least 350,000 "liquidators" went to Chernobyl. The first arrivals worked in 40-second shifts because radiation levels were so intense.

http://argee.net/DefenseWatch/Chernobyl%20Reality%20and%20Myth.htm Chernobyl: Reality and Myth. .. A careful examination of the Chernobyl incident reveals that it was a stupid, completely unnecessary accident resulting from gross criminal negligence and total managerial incompetence. This problem could only have happened within a political system that was completely out of contact with the real world...

http://www.youtube.com/watch?v=Gmn8La6AD-0 snigblower on Jun 3, 2010. Guide Yuriy and SoloEast Travel director Sergei visit control room of the reactor # 4 just before the workers will finish a brick wall which will block the entrance to the site/