Democracy for export is short article about war in Iraq, written April 15, 2003 as an exercise for the course of English as foreign language in the University of Arizona, USA. Within two years since the distribution of the text, the Author met problems arranging the USA Greencard and had to leave from the country. The text is copypasted from the Samizdat version at http://budclub.ru/k/kuznecow_d_j/demo.shtml without torification.

Not so many people on the Earth sympathize with Saddam Hussein and his regime at Iraq, but at the same time, not so many people approve the US-UK military action there. I do not mean the extremist groups who consider America as "Absolute Evil". I mean the people who like the US, but consider the invasion to Iraq as error [1]. After the decision about the military action in Iraq [2], and especially after its deployment [3], I saw many protesters at http://www.yahoo.com/news , http://vesti.ru and other sites. The people protest against the violent liquidation of the violent dictator; they think that the military action is not an appropriate way to bring a country the civilization and democracy, to punish dictators, and to provide the peace of the world. The people do not accept the democracy which falls down from the sky like a bomb or as humanitarian help. In come cases, the foreign invasion allows the establishment of a prosperous society, as it took place in 1945 with Japan [2]. Perhaps, the important factor of the capitulation of Japan was the use of nuclear weapon. (Just that the Coalition forces would like to avoid in the case of Iraq.) From my point of view, it was important that Japan aviation made the first hit the US troops (the Pearl Harbor attack). Then even the use of the weapon of mass destruction by the US did not look so unlawful. In the case with Iraq, contrary, the first hit was made by the US troops. This caused strong arguments to the pro-Saddam propaganda, and the military action looked like aggression.

However, the intent of the US-UK coalition was not to destroy the Iraqi population; the aim was to punish the dictator and to liberate Iraqis [5]. Iraqis were expected to support the troops of the coalition. There was no such support. As a result, such powerful country as US, with support of UK, could not easily put into order a country with hundred times less population [6]. In addition, the majority of this country were supposed to be enemies of Saddam! At the beginning of the war, it was expected that after first shouts, Iraqi would be surround and accept and welcome Americans as liberators [7]. Indeed, it happened to be very difficult, to make Iraqis to surrender [8]. The Iraqi leader stayed safe in his bunker [9], while the coalition had strong difficulties trying to organize the life at the liberated territory [10].

Many people doubt that the liberation (occupation) of Iraq provides our security. The enemy is distributed and hidden. Our "Western" civilization has no effective weapon against martyr terrorists. It was possible to change the government at the wide country Afghanistan, but Bin Laden condemned in the organization of the tragedy of 11 September 2001 was not caught. The Iraq territory is occupied, but the dictator of the country seems to have escaped. Many Iraqi are already killed, and what should we expect from the eastern people who have lost their relatives in the war? They may become hijackers, martyrs to make a vengeance for their families. This could be the aim of Saddam Hussein and other anti-American leaders who provoked the conflict.

Now many people think that none of the aims of the military action at Iraq was reached. First, Iraqis do not accept our civilization. Second, Saddam and the top of his military officers seem to have escaped. Third, we are afraid of new terrorists boiled by the public opinion in Arabian countries.

Many researchers, like Dr.L.Vodopyanov from San Jose [11] or prof.Noam Chomsky from MIT [12] had warned about unlawful character and not-so-easy scenario of this war, but their voices were not taken into account. I hope, the people who worry about this country, who feel pain for the problems of this country will not be considered as enemies. This would be a fatal error. This great country has already repeated some mistakes made in the last century by the Soviet Union, and I see no reason for the US to repeat this error too. 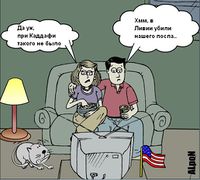 hmm.. They killed our ambassador at Lybia
oopc.. There were no such things while Gaddafi[1]

2007. https://www.dissentmagazine.org/article/exporting-democracy-what-have-we-learned-from-iraq DANIELE ARCHIBUGI. Exporting Democracy: What Have We Learned from Iraq? Spring 2007

2008.02. https://www.cato.org/policy-report/januaryfebruary-2008/can-we-export-democracy Can We Export Democracy? JANUARY/FEBRUARY 2008.

2016.05.24. https://oslofreedomforum.com/talks/russians-are-ready-for-democracy 2016 Oslo Freedom Forum May 24, 2016. The Russian government doesn’t love activist Vladimir Kara-Murza, but he loves Russia. That’s why he is devoting his life to the fight for democracy in Russia, even though it might get him killed. Hear him deliver a powerful call for change from the stage at the 2016 Oslo Freedom Forum.
2016.05.28. https://www.youtube.com/watch?v=kPpY7TUjm3E VLADIMIR KARA MURZA | RUSSIANS ARE READY FOR DEMOCRACY. May 28, 2016. Vladimir Kara-Murza's talk at the 2016 Oslo Freedom Forum. Message to Western citizen: .. Of our friends in the West we ask only one thing. We are not asking for your support. It is our task to change Russia, and we will do it ourselves. The only thing we ask from you is that you stop supporting Mr.Putin by treating him as a respectable and worthy partner on the world stage. And above all, by allowing his cronies to use your countries as havens for their looted wealth. And please stop falling for the lie that Russians are somehow uniquely unsuited, incapable, not ready for democracy. We are suited. We are capable. We are ready. And we will get there, just like you. ..

2021.09.29. https://www.globaltimes.cn/page/202109/1235446.shtml Top US general calls Afghan war "strategic failure", By Agencies Published: Sep 29, 2021 10:25 AM. Gen. Mark Milley, chairman of the US Joint Chiefs of Staff, said on Tuesday during a Senate hearing that it is a "strategic failure" with the Taliban back in power and US withdrawal from Afghanistan.