Statue of airilane made of bamboo [1]

Cargo cult (Культ карго) is religion based on idea, that the material possessions were acquired not by manufacturing them, not by hard work, but as a result of some “right” prayers and rituals.

Cargo cult is attempt to imitate behavior of some more successful people, classes, countries without understanding, how does it work [2].

In the similar meaning, the expression "wants the milk without the cow" is used [3][4].

Richard W.Byrne indicates that animals (monkeys) tend to imitate some actions, but do not seem to learn by imitation. [5]

Term Cargo cult had been created in century 20, after World War II. The barbarian tribes met the American airplanes used to deliver the military cargo. American soldiers tried to maintain good relations with the natives, and were successful in this. The natives considered the airplanes as a gift from gods, and tried to serve these gods in a way, they did serve gods during many generations. The emulations of cargo airplanes, that appeared in this activity, become symbol of the phenomenon and gave it name Cargo cult. [6]

Attempts to get airplane, emulating them with bamboo and leafs (instead of to learn mathematics, physics, chemistry, metallurgy, aerodynamics, etc.), is considered as classic example of Cargo cult.

Belonging to the "Rich class" sometimes is associated with extensive use of luxury. Such a custom is considered, at least intuitively, as a way to richness. Several authors indicate, that the common perception of rich people is often just wrong [7][8][9]. In the simila way, construction of bamboo airplanes does not help natives in learning sciences and development of technology.

Wearing of religious attributes, performing magic rituals often is considered as a way to God.

Cargo cult is observed in emulations of science. It is considered as activity of emulating the accessories borrowed from civilized countries, mounting some expensive equipment or writing some formulas, without to formulate and revise any new scientific concepts. [11]

Attempts to separate science from its imitations (Kargo cult) are presented in article Place of science. 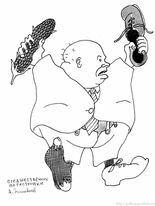 In century 17, Peter the Great tried to bring the European technology and science to Russia. [12] Perhaps, Peter did not understand, that certain freedom is necessary for science, and the technology cannot develop without science. He could build-up the great channels to promote the transport. But he could not use them, as the people around were his slaves. Three centuries later, Stalin repeated the attempts with channels, with similar results: many people dead, but the channels did not help industry.

Peter "made window to Europe" [13], but he did not make door. He just did not understand, how does it work in Europe.

That time, term Cargo cult was not yet invented, but those phenomena can be qualified as Cargo Cult.

On 1959, Soviet dictator Khruschev Nikita Sergeevich visited the USA. [14]. Khruschev tried to learn the American style of industry and reproduce it in the USSR. (And even better, due to the only true theory of Marx-Lenin.) Either Khruschev did not understand, that it does not work without free market of labor, goods, technology, that it requires democracy, or he initially considered sovetism as a fake for fool citizen, who were forced to believe, that The Current Generation of Soviet People Will Live Under Communism. Khruschev, instead of democratization of the USSR, continued repressive politics, see Novocherkassk murder (Новочеркасский расстрел), 1962; no any attempts are detected to buildup the communism, promised for year 1980 (see 1961.ProgramKPSS), just cultivation of corruption and criminal.

Creation of imitations of democratic institutes in a barbarian country is a cargo cult. Imitation of parliament, imitation of the election procedures (see Election fraud), censorship pretend to give impression of prosper democratic society.

The imitation does not work as a democratic institute, as the statue of airplane does not fly. In the case of Russia, such imitations are expected to lead to the collapse of the country during century 21, see Collapse of RF.

https://en.wikipedia.org/wiki/Cargo_cult Cargo culting was a specific phenomenon and later a general concept. The specific phenomenon was the belief which began among Melanesians in the late 19th and early 20th centuries that various ritualistic acts such as the building of an airplane runway would result in the appearance of cargo via airplanes, even though they did not have a specific reason to believe that airplanes would land on their site.[1][2]. The term was then debated as a more general concept in anthropology and sociology afterward. More recently, "cargo culting" is a general term to describe the adoption of a technology or practice based on the observation that it has been used elsewhere, without understanding the motivation for its use elsewhere.// The term was first used in print in 1945 by Norris Mervyn Bird, repeating a derogatory description used by planters and businessmen in the Australian Territory of Papua.