The Current Generation of Soviet People Will Live Under Communism 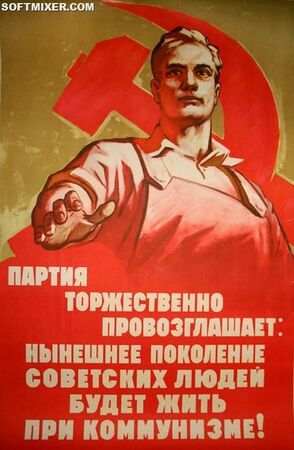 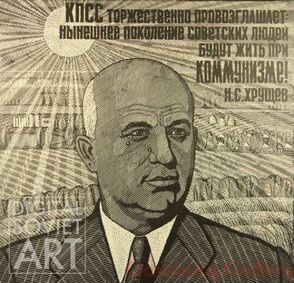 "The Communist Party Solemnly Declares: The Current Generation of Soviet People Will Live Under Communism". N.S.Khruschev [1]

The Current Generation of Soviet People Will Live Under Communism (Нынешнее поколение советских людей будет жить при коммунизме!) is one of postulates of sovetism, that were compulsory for education and acceptance in the the USSR (century 20).

The Current Generation of Soviet People Will Live Under Communism is last statement of the program of KPSS, Aaccepted at the 22 congress of KPSS. [2]

History of the thesis

So, in the USSR, the communism in the first meaning of this word had been expected to happen in 1930-1940.

Actually, the opposite phenomena took place. The society society felt to barbarian of genocide, concentration camps of Gulag, slavery, and then, since 1939, to the bloody war. Perhaps, the Soviet leaders (Stalin, Beria) needed the World War II, in order to force the people to forget, that the communism had been promised by their God and the time is over.

Estimates show, that, during the USSR, the soviet veterans murdered the most brave and honest citizen, of order of 10^8 people (See Большевики убили почти всех). For this reason, term communism has its second (and very sad) meaning, denoting slavery, Gulag, genocide, poverty and total corruption of the administration. 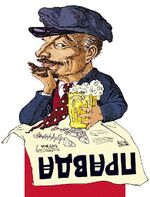 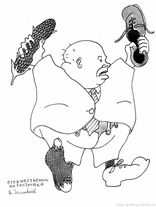 The same idea had been reused in 1961 by Nikita Khruschev. As Lenin before, Khruschev had no hopes to keep the superior power during 20 years more; so, he used the same principle, as Lenin: Après moi le deluge.

Lenin also was not inventor of this phylosophy; the sentence Après moi le deluge is attributed to Louis XV of France (1710–74). [4]

Sentence The Current Generation of Soviet People Will Live Under Communism is used in the Soviet propaganda to hide the total corruption among Soviet veterans, the slavery of the Soviet people and enormous expenses of the top of the KPSS.

The leaders of KPSS seem to knew, that it is not possible to build-up the communism in the first meaning of this term. Perhaps, they also knew, that the USSR goes to collapse in the same 20th century. Then, the thesis The Current Generation of Soviet People Will Live Under Communism is used to reveal the patriots of Russia, who expressed doubts in this postulate. The Soviet veterans worked to convert the people of USSR to immanent slaves; revealing and extermination of patriots (in the first meaning if that term) was one of coals of the Soviet administration.

Sovetism uses many wrong statements to reveal citizens, who can use logic. In the USSR, the primary selection is performed by the teachers of history. Basing on textbooks, the teachers suggest to the pupils the bunch of fake evidences and doubtful statements. Such statements not only contradict the direct observations, but also contain the internal contradictions.

Those students, who can easily repeat the statements of Sovetism, are qualified as "good", in the sense, that they are not expected to resist against the Soviet fascism. The students, who mention the internal contradictions among postulates of Sovetism, or note the contradiction with the direct observations, are qualified as "bad", they are not suitable for maintaining of slavery and fascism.

After the school and universities, the job of the teachers of history in the USSR is continued by members of the KPSS and, especially, agents of KGB. They use the same postulates of Sovetism to reveal and suppress citizen, who do not support the Soviet fascism.

Postulate The Current Generation of Soviet People Will Live Under Communism appears as important tool of the Soviet veterans in genocide of people of the USSR.

The society, built up on the completely wrong postulates, did not remain longer, than average human lifetime. Since 1990s, the USSR collapses. Since that, the people in Russia begin to understand, that they used to live as slaves in the fascistic country with completely wrong ideology. Publications about Russia indicate, that this understanding does not go fast; so, to collapse of RF (similar to that of the USSR) is expected duting century 21 by many authors.

The collapse of the USSR (in contrast with the communism promised) cause the misorientation of people who used to live in the USSR.

Soviet veterans try to hide the evidences of their crimes. In articular, they secret and destroy the historic documents. This practice is described by George Orwell (See Orwell1984).