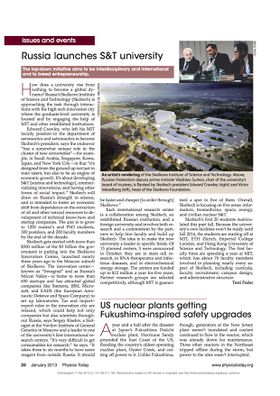 Publication by Toni Feder about Skolkovo [1]

Toni Feder is pseudonymous of a frauder, who had published the article entitled "Russia launches S&T university" in scientific magazine Physics today, 66(1), 20 (2013). [1]

That article promotes the pseudo-scientific center Skolkovo as a "university". February 2013, the critics of that article had been submitted. [2].

Due to the behaviour of Feder with respect to the article about Skolkovo mentioned, all the publications by this author are considered, softly speaking, as doubtful. The list of publications by Toni Feder is available (for November 2013) at http://scholar.google.com/citations?user=3zJ5FfsAAAAJ

Some confusion may be caused by nusspelling of name of Toni Feder.

At the scan from the Journal page, the author appears as Toni Feder.

At some correspondence, he is marked as Tony Feder.

Sorry for the confusion. The origin could be just misprint.