From TORI
(Redirected from Ackermann)
Jump to: navigation, search

Ackermann function is defined in a little bit different way in various sources. In TORI the definition is suggested, that is oriented to the application for the theory of superfunctions, and it is different from that used in the Computability theory. While no commonly accepted system of notations is established, at the reference to the Ackermann function, either the definition, or, at least, link should be provided.

In order to simplify the use in formulas, the writing with lower case letter, ackermann, refers to the Ackermann function. Beeng written with capital, Ackermann, this word may refer to famous scientist Wilhelm Ackermann[1].

For given complex number \(b\), called "base", and given integer number \(n\), called "number of Ackermann", function \(A_{b,n}(z)\) is called Ackermann function, iff it satisfies the following equations:

The last equation can be referred also as transfer equation.

Often, it is assumed, that base \(b\) is real number, bigger than unity; this case is easier to interpret and to apply in physics, than cases with complex \(b\).

In this system of notations, each ackermann \(A_{b,n}\) appears as transfer function in the transfer equation for \(A_{b,n+1}\).

and so on. The most of the school–level Algebra and significant part of mathematical analysis are based on the first 3 ackermann functions and their inverse functions in various combinations.

Construction and analysis of higher ackermanns, beginning with tetration, is under development since century 20 [3] and, for integer values of base and argument, even earlier. [4].

Holomorphic extension for tetration (to base e) had been reported only in 2009 [5]. 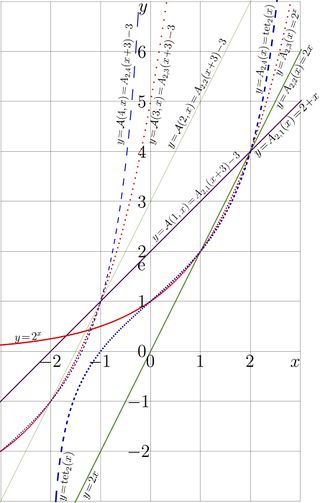 For the base \(b\!=\!2\), the ackermann is called binary, or classical. For this base (or for this case) there exist another and more popular notation,

In order to avoid confusions, if character A refers to the base 2, and the notation without subscripts is used, this character should appear with Calligraphic font. In Latex (and in TORI), this name can be typed as "\mathcal A".

In order to make the relations between the two systems of notations for the ackermann functions, both, Italics \(A\) and Calligraphic \(\mathcal A\), both functions are plotted in the figure at right for the real values of the last argument.

For the binary ackermanns, the chain of basic equations can be slightly extended, including the Zeroth ackermann, in the gollowing way:

As in the case of the notations with subscript, the last equation specifies, each new ackermann, been considered as holomorphic function of the second (id est, the last) argument is superfunction with respect to the previous one; and the only zeroth ackermann is exception.

Equations for \(\mathcal A\) can be also considered as definition of ackermanns to base 2. The equation for this spatial case are more classical, canonical, because in this way they usually appear in the literature for the Ackermann dunctions. In TORI, aiming the application for iteration of exponential, the match with exponent, tetration and pentation is more important; for this, the misplacement of both the argument and value of functions for constant \(3\) is not used, in such a way, so, the 3d ackermann is just exponential, the 4d one is just tetration, and so on.

The TORI notations are important for the occasions when the name of the function appear without argument, but the order still should be specified. The nth iteration of the mth binary ackermann can be written as

However, this notation is much longer than the equivalent \(A_m^{\,n}\).

For the allowance with other sources, the relation 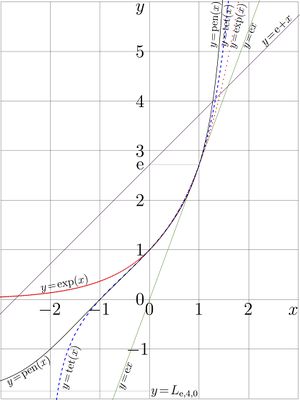 In analogy with natural exponent and natural logarithm, ackermanns to base \(\exp(1)=\mathrm e \approx 2.71\) are called "natural", although in other context the word natural may have pretty different meanings. If the base is \(\mathrm e\), it may be omitted, and, by default, if it is omitted, it is assumed to be e.

For real values of argument, the first 5 natural ackermanns are shown in figure at right.

Graphics of the natural ackermanns pass though point \((1,\mathrm e)\).

Neither solution of the transfer equation, nor that of the corresponding Abel equation is unique. The additional conditions are required to evaluate the function. [6].

Since 1950, the holomorphism had been suggested as the important criterion.

It is suggested that asymptotically, each new ackermann approaches the fixed point of the previously considered ackermann. However, this assumes, that the ackermanns are investigated and implemented one by one. As the exponent is already considered and implemented, the tetration can be treated in the similar way, them pentation, and so on.

The real–based ackermanns can be considered as good objects to verify methods of construction of superfunctions and Abel functions. After analysis of various super-exponentials (one of them is 4th ackermann, id est, tetration), the same methods were applied to factorial and to functions, that have sense in the laser science. [7].

One of possible application of the ackermann functions is denoting of huge numbers. However, the relation between various fast growth functions should be established.