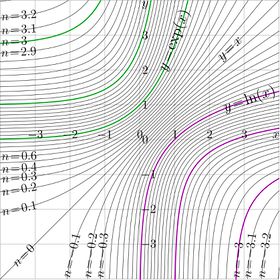 In TORI, the number in superscript after a name of any function denotes the number of iteration. This notation is neither new, nor original; Walter Bergweiler had used it in century 20 [1].

Both, tet and ate are holomorphic functions; so, the representation above can be used for non-integer $n$. The exponential can be iterated even complex number of times.

Representation of $\exp^n$ through function tet and ate defines the $n$th iterate of exponential for any complex number $n$ of iterations. Methods for the evaluation are described in 2009 by D.Kouznetsov in Mathematics of Computation [2], and the efficient C++ complex double implementation are described in 2010 in Vladikavkaz mathematical Journal in Russian; the English version is also loaded [3]. WIth known properties and the efficient implementation, functions tet, ate and non–integer ietrations of the exponent shouls be qualified as special functions; in computation, one can access them as if they would be elementary functions. The complex doube implementations of functions tet and ate are loaded to TORI, see fsexp.cin and fslog.cin; they run at various operational systems; at least under Linux and Macintosh. Reports of any problems with the use or the reproducible bugs should be appreciated.

Complex maps of the $n$th iteration of exponential, $f=\exp^n(x+\mathrm i y)$ are shown in figures at right with lines $u=\Re(f)$ and lines $v=\Im(f)$ for various values $n$ in the $x$,$y$ plane. As the function is real-holomorphic, the maps are symmetric; so the only upper half plane is shown in the figures.

In the figures at right, one of these cuts is seen; it is marked with dashed line. The additional levels $\Re(L)$ for the real part of $\exp^n$ and $\Im(L)$ for the imaginary part are drown with thick green lines; of course, these lines cross each other at the branch point $L$.

Properties of the iteration of the exponential are described.

$\exp^n(z)$ is holomorphic function with respect to $z$ and with respect to $n$. Properties of this function are analyzed and described. The efficient (fast and precise) algorithm for the evaluation is supplied with routines fsexp.cin and cslog.cin.

With achievements above, function $(n,z) \mapsto \exp^n(z)$ is qualified as special function. Designers of compilers and interpreters from the programming languages are invited to borrow the implementations of tetration and arctetration in order to provide the built-in function, that evaluates $\exp^n(z)$ for complex values of $n$ and $z$. In particular, in Mathematica, there is already name for such a function; it should be called with Nest[Exp,z,n]. Up to year 2013, the built-in function Nest is implemented in such a way, that number $n$ of iteration should be expressed with natural constant, positive integer number [4]. Over-vice, the built-in function generates the error message instead of to perform the calculations and evaluations requested. With use of superfunctions and Abel functions, Nest could be implemented for more general case.