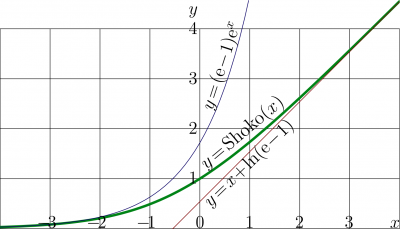 Shoko function and two its asimptitics

Shoko function describes the growth of the fluence of pulse of light in the homogeneous amplifier within the simple kinetics of laser medium.

The Shoko function can be expressed through the elementary functions:

The explicit plot of Shoko function is showm in figure at right. In the same figure, the two its asimptotics are plotted, 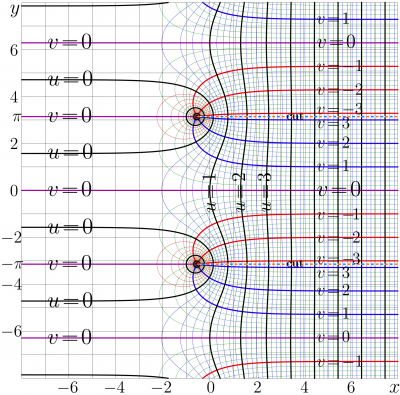 The complex map of the Shoko function is shown in figure at right.

The Shoko function is periodic; the period \(P=2 \pi \mathrm i\) is pure imaginary.

and the series of cutlines \(r+\pi(1\!+\!2 n)\mathrm i + t\) for integer values of \(n\) and positive values of \(t\). The cutlines are along the real axis, and there is no easy way do direct them to the opposite direction, keeping the representation simple.

At large negative values of the real part of the argument, the Shoko function shows almost exponential growth:

At small values of the argument, the Shoko function expands to the Taylor series as follows:

Many Taylor coefficients of the expansion can be calculated with some Mathematica or Maple software; the series converges at

At large positive values of the real part of the argument, the Shoko function grows almost linearly:

The asymptotic series seem to diverge at any values of \(z\), but can be used for the precise evaluation of Shoko function at large values of modulus of the real part of the argument, while the straightforward application of definition is difficult. The cut lines could be directed to the left by the price of loss of periodicity. The corresponding modification of the Shoko function is considered in the next section. 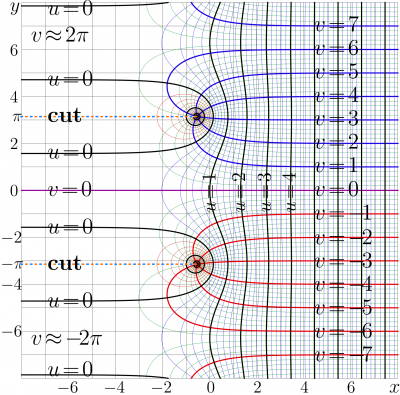 Following the tradition of TORI, it is desirable to direct the cut lines at the complex map of the function to the left. Such a modification of the Shoko function is denoted as Shoka function:

Complex map of the Shoka function is shorm in figure at right.

For moderate values of the imaginary part of the argument, say, \(|\Im(z)|<\pi\), the Shoka function coincide with the Shoko function, \(\mathrm{Shoko}(z)=\mathrm{Shoka}(z)\).

The price for orienting of cutlines to the left happened to be the loss of periodicity. For this reason, it is difficult to choose, which of functions, Shoko or Shoka should be considered as the "main", "prncipal", in order to treat another one as the the "modification", alternative.

While the imaginary part of the argument is not too latge, say, \(|\Im(z)<4\), functions \(\mathrm{Shoka}(z)\) and \(\mathrm{Tania}(z)\) look similar. At larger values of the imaginary part, and negative values of \(\Re(z)\), the deviation becomes qualitative; the Shoka function has countable set of cutlines, while the Tania function has only two.

The holomorphic extension of superfunctions may be important tool of analysis of the transfer functions of the laser amplifiers. The only pair of the cutlines correspond to the medium with fast response (or amplification of a long pulse), id est, the continuous or quasi–continuous operation. The countable set of the cut lines correspond to the medium with slow response (or amplification of a short pulse), id est, the pulsed operation. This hypothesis could be tested with the precise measurement of the transfer functions of the realistic amplifiers and numerical analysis of the corresponding superfunctions.

The \(c\)th iteration of the Keller function can be expressed through the Shoko function as usually;

As the argument of the Shoko function is used in (1) only once, the calculation of the inverse function is straightforward:

The simple representation agrees with the specific values of the Shoko and ArcShoko functions: 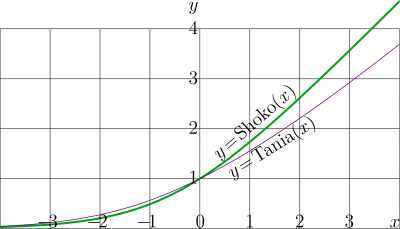 The Shoko function appears at the consideration of propagation of short pulse [1][2] in laser amplifier with simple kinetics of the laser medium.

in TORI, the Keller function is used as an example of the transfer function, for which the superfunction can be constructed as elementary finction, and the Shoko function is this function.

While the fluence is small, it grows exponentially, according the the asymptotic (2).

The origin of coordinate along the direction of propagation is choosen in such a way, that \(\mathrm{Shoko}(0)=1\), which corresponds to the fluence equal to the saturation fluence.

At large values of fluence, it withdraws almost all the energy, stored in the gain medium, and, therefore, the growth is almost linear, according to the asymptotic (4).

Origin of the name

Shoko had strongly pressed the Editor to work as hard as a horse (see figure at right), in order to apply the formalism of superfunctions to the laser science. Then Yulya helped to find the literature, where the simple model of laser medium is used to describe the growth of the fluence of a pulse during the amplification; this growth can be expressed with function (1). As the name Yulya function already has been occupied (denoting the dependence that appears in the interferometric microscopy), the function (1) is named after Shoko (with her permission).

However, the colleagues who specialize in history of science may find that another name to be more suitable for function (1). Then they are cordially invited to describe the properties and applications of this function under that another (more suitable) name and send the link to the Editor of TORI, in order to cite it in this article.