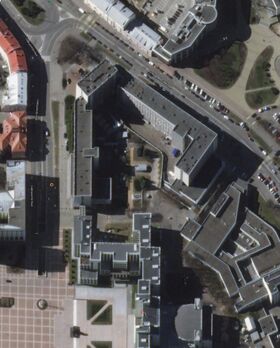 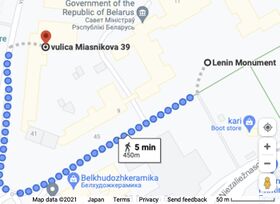 The Centrkurort offices are located in vicinities of the Lenin monuments and/or Lenin streets (the examples are shown in maps at right). Ominous place names indicate the criminal, terroristic activity of the Centrkurort employees.
In year 2021, such an activity is confirmed by publications: Centrkurort is reported to organize the smuggling of illegal migrants to Europe and their use as hostages; some of the illegal migrants die. For this reason, the Centrkurort is qualified as terroristic organization. Such a qualification agrees with qualification of the Belorussian usurper (Lukashenko Aleksandr Grigorievich) as an international terrorist [2][3][4].

The following directions of Centrkurort offices are indicated at https://www.otpusk.by/kontakty/

All the four places point to the terroristic activity.

The main office of Centrkurortа (Минск, ул.Мясникова,39) is in a hundred meters West from the Lenin monument (see map at right).

At Vitebsk, the office of Centrkurort is located near streets named after Lenin, Frunse and Kalinin (see maps at right)

At Gomel, the office of Centrkurort is located at Lenin street.

At Mogilev, the office of Centrkurort is located near street Komsomolskaia, named after the Soviet youth pro-communistic (id est, fascistic) organization "Komsomol". In addition, in 300 m South-West, the Lieninskaja street passes by.

During the USSR, Lenin, Kalinin, Frunze and their crime partners perform the terror, genocide, murdering the most of their compatriots, or order of 10^8 humans (see Большевики убили почти всех); the Komsomol worship those terrorists.

All the offices mentioned are placed in vicinity of sinister objects, that glorify the gang of terrorists, criminals.
One can guess, that the personal of these offices is also formed from criminals.
Such a hypothesis shows good agreement with publications of year 2021 related to Centrkurort.

For year 2021, the following personal is specified at https://www.otpusk.by/o-kompanii/rukovodstvo-kompanii/ [7]:

In year 2021, Personal of Centrkurort is suspected in recruiting of ihtamnets for attacks on Poland at the border from side of Belarus. One of foal of the attack seems to be smuggling of agents of KGB to the European Union [9].

According to publications, at least some of migrants are misinformed, being promised the way to the European Union. The staff of Centrkurort sell the tours to Europe, then, in cooperation with Belorussian police and Belarusian border patrol, deliver the migrants to the border with Poland and push them to penetrate to territory of Poland illegally [10][11].

These migrants appear to cover the ihtamnets, agents of Russian and Belarusian KGB. They break the border fence and penetrate the European Union. At least some go them are caught by the Polish police and returned back to Belarus.

Some of migrants are women and children; they seem to be used as hostages, as a human shield, with goal to accuse the Polish side and to force the European Union to accept the terrorists. 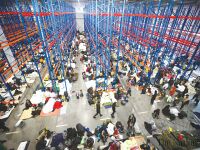 Centrkurort is suspected in collaboration with terrorists. Centrkurort seems to play important role in the Putin world war against the Human civilization. Centrkurort supply the customers, that are used as hostages by Putin Vladimir Vladimirovich and Lukashenko Aleksandr Georgievich.

The Centrkurort customers are reported to be used as hostages: at the border with Poland, the border patrol do not allow the migrants to go forward to European Union, while the zagradotriads organized by Centrkurort and KGB do not allow them to return back to Minsk. The migrants are trapped at the strip along the border with Poland, ant are used as hostages. The international organizations provides the humanitarian help, but the amount is not sufficient. Several migrants dead, trying to get the European Union.

Terrorists use the hostages at the border as a card to exchange it for recognition of Lukashenka as president and the lifting of sanctions against his crime accomplices. [15]
2021.11.20, thousands migrants are concentrated in the hangar near the border with Poland [14]. Such a concentration causes worries in the European Union. 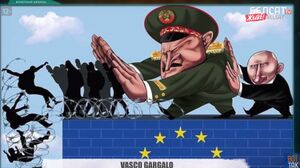 In order to improve the service, of Centrkurort negotiate with Polish border patrol.
The two suggestions are discussed:
1. The water guns, used by the Polich border patrol, should operate with warm water.
2. Daily, the barbed wires at the border should be disinfected with ethanol.
With these improvements, Centrkurort expect to attract even more customers.

Modernization began in the migrant camp near the border with Poland.
It is planned to build a maternity hospital, two schools and an ice palace. 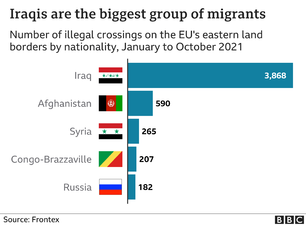 Do you know, that offices of Centrkurort are located near places, named after the Soviet terrorists?
Did you know that the place names help to identify Centrkurort as a criminal organization?

How many customers, delivered by Centrkurort to the border with Poland, speak Russian or Belorussian?

How many customers, delivered by Centrkurort to the border with Poland, speak Arabian or Kurdish languages?

How many of them are recognized as citizen by the Iraq, Afghanistan, Syria, Congo, Iran or Russia administration?

How many of them are KGB agents?

How many of your customers have the Schengen visa to enter the European Union?

How many of your customers died at the attempt to enter the European Union without Schengen visa [18]?

How many of your customers apply for asylum at Russia or at Belarus?
Why do the migrants want to enter the European Union, instead of to look for a job at Belarus?

Do you consider Lukashenko Aleksandr Grigorievich as your boss? Do you expect him to stay forever (as a Big Brother from Orwell1984)?

Have you observed any interest in your activity from side of police?

Which statements of this article you consider to be doubtful, not sufficiently supported with references?

Publications about Centrkurort are collected and analysed in TORI with scientific goals.
Struggle against the Belorussian offees does not belong to the set of these goal. In particular, evidences, collected in the cited literature, should not be considered as an appeal to bomb the Centrkurort buildings, nor as a justification of a total war against the Centrkurort employees.